We are a team of multidisciplinary professionals committed to redefine senior care.

The provision of personalised tailor-made care plans are at the core of our philosophy, which when coupled with a tasteful environment will enable our seniors to thrive. 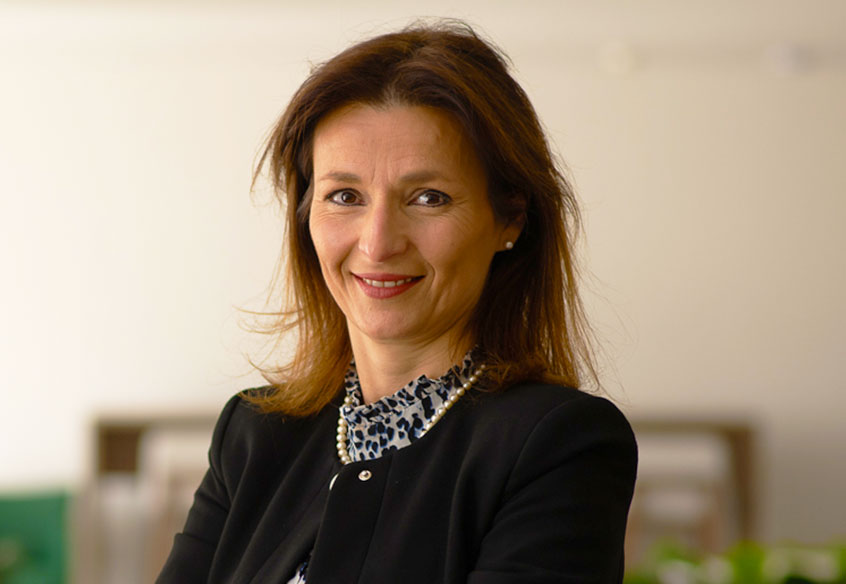 Ms Jackie Camilleri is a Certified Public Accountant, a graduate of the University of Malta with a B.A (Hons.) degree in Accountancy and is a Fellow Member of the Institute of Accountants. She holds a Master Degree in Business Administration from Heriot-Watt University of Edinburgh Business School.

Ms Camilleri has held various positions within the AX Holdings Group of Companies during the period 1990 – 1998 including those of Financial Controller AX Construction and Finance and Administration Manager of Capua Palace Hospital.

In 1998 Ms Camilleri joined the Foundation for Medical Services (FMS) as one of the team members responsible for the opening of Mater Dei Hospital.
Ms Camilleri also has work experience in the United Kingdom where she joined the National Health Service and served as Directorate Management Accountant at Stock Mandeville Hospital.

In 2014 Ms Camilleri was appointed Chief Executive Officer at Hilltop Gardens, a subsidiary of AX Holdings Group of Companies, where she took over the management and development of the Retirement Village in its entirety.

In 2017 Ms Camilleri took over the advisory position which led to the design and setting up of Golden Care Home and in 2019 she was appointed Chief Executive Officer.

Ms Camilleri has also served as a Board Member of the Foundation for Medical Services, and Vice Chairman of the Malta International Airport, and today still occupies the position of Director on a number of listed companies. 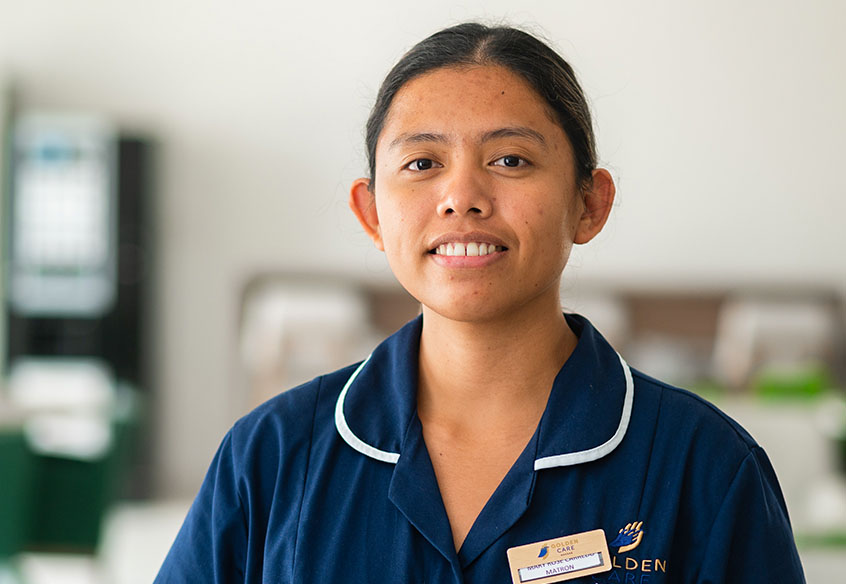 Ms Mary Rose Carredo is a local registered nurse with years of experience both locally and abroad.  In 2010, Ms. Carredo obtained her Bachelor of Science of Arts in Nursing at the University of Cebu in the Philippines, and a year later in 2011, she also acquired her nursing licence.  Ms. Carredo went on to pursue her studies and acquired a Masters of Arts in Nursing Administration, at the University of Cebu, in 2014.

During her tenure in the Philippines, Ms Carredo worked in Phlebotomy, Accident & Emergency (A & E) as well as Diagnostics and Medical specialities.

Ms. Carredo moved to Malta in 2017 and joined Golden Care Home in 2019. Given her commitment, organisational skills, and nursing qualifications and experience, Ms Carredo was soon promoted to a lead carer and after completing the Bridging Course at the University of Malta and acquiring her local nursing registration, she was appointed as the Care Home’s Clinical Lead.  In April 2022, Ms. Carredo, was promoted to Matron, and is responsible for all the clinical issues, including the team of healthcare professionals. 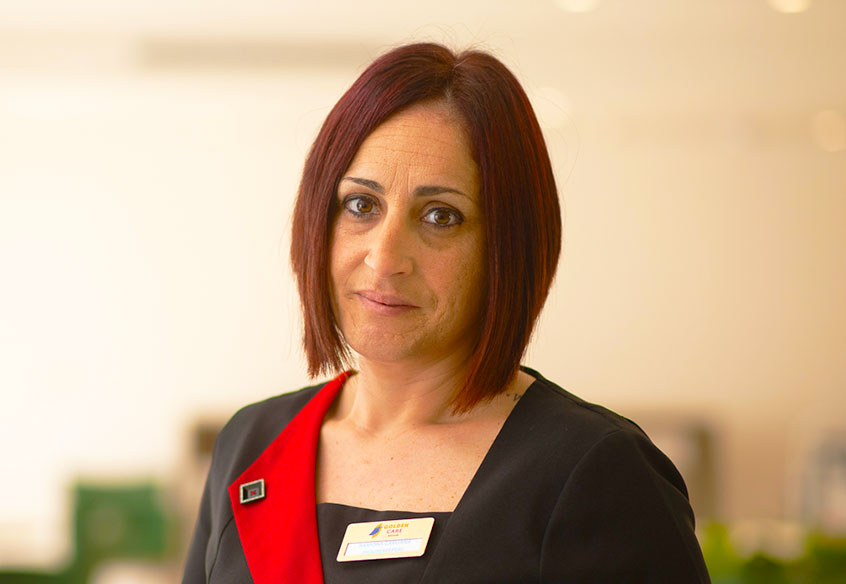 Ms Ramona Caruana joined the Golden Care team after 14 years working in a four star hotel, managing a team of thirty people in the housekeeping department. She is responsible for the care home’s overall cleaning, supply and washing of all linen including residents’ personal clothing as well as provision and upkeep of staff uniforms.

Ms Caruana also manages the daily cleaning schedules for all employees and provides extraordinary customer service at the home.

She prioritizes safety at the workplace and practices exceptional time management and leadership skills. 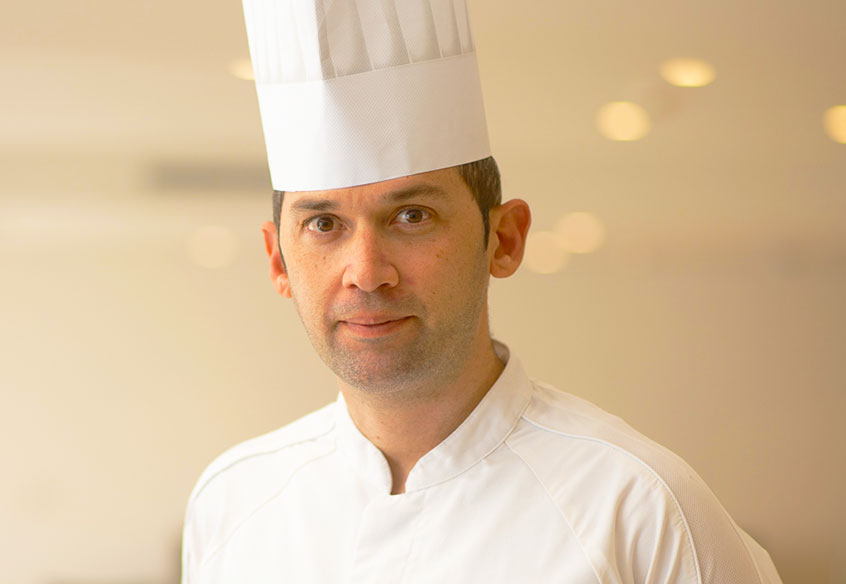 Mr Andreas Camilleri is the Kitchen Executive at Golden Care. He has been working in the hotel industry since the age of 16. He studied at the Institute of Tourism Studies (ITS) in Malta and it was there that he began to develop and share his passion for cooking that would serve as his resume and deem him a coveted chef.

He has worked in a number of 4 and 5-star hotels in the UK, Malta & Gozo and at the young age of 24, he was already in charge of his own kitchen as Executive Chef.

From there on, Andreas continued pursuing his career in the F&B and Hotel Administration and was given the opportunity to Manage a 4-star boutique hotel in Sliema which he successfully did for 2 years.

In his free time, Andreas enjoys spending time with his son, partner and two dogs.

At Golden Care home, Andreas heads the dining department. Through ongoing liaison with the clinical department, he ensures that our residents are offered a wide selection of nutritious dishes which respect their dietary requirements. 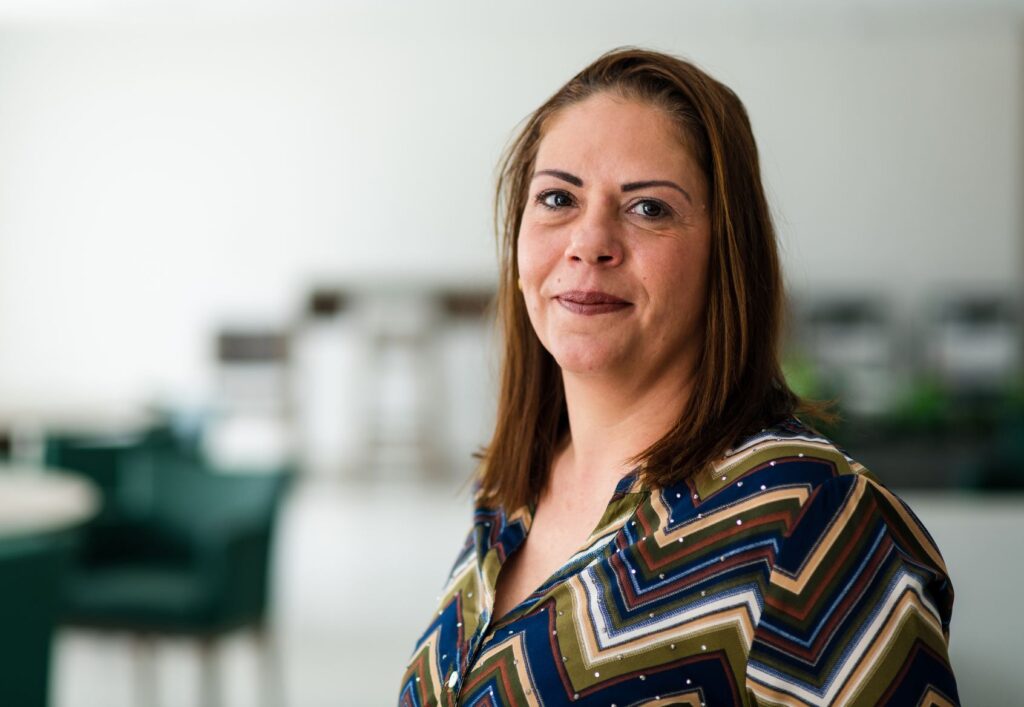 Mrs Annabelle Cauchi joined Golden Care Ltd on the 22nd January 2021 as the Head of the Events Department. For several years, she assisted in the day to day running of her family business.

For three consecutive years, she was elected as a local counsellor in her beautiful hometown of Għargħur, where she spent most of her time providing good quality service in the community. At times this also included participation in voluntary work. Annabelle is also a qualified caregiver with years of experience in long term residential care services.

Annabelle is responsible for the organisation of all internal and external activities convened daily for our residents at Golden Care. She passionately creates a wide spectrum of events and in tandem with this, liaises with our inhouse events tutors, to ensure an enticing programme of events all year round. Knowing that events form an integral part of our care plans, Annabelle also works closely with the caring team and considers the residents’ dependency levels, as well as preferences when formulating an events programme. Our chaplaincy services, inhouse entertainment and outings also fall within her remit.

To ascertain our residents’ wellbeing, Annabelle in her capacity as events co-ordinator is also responsible for the provision of hairdressing and beauty services for our residents.

The care sector is very close to Annabelle’s heart and through the organisation of events she aims at redefining each resident’s experience at Golden Care Home. 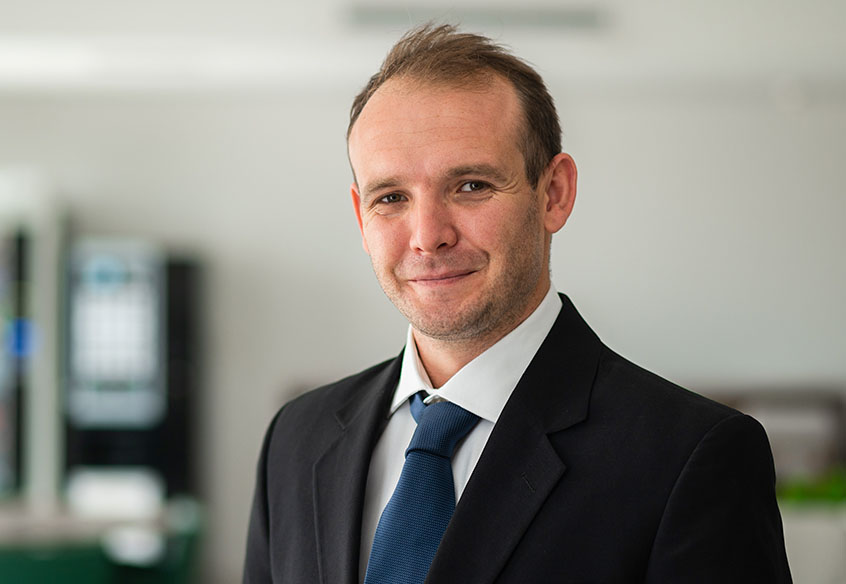 Mr. James Tanti occupies the position of Senior Accounts Executive at Golden Care Home  and is presently in the process of acquiring an ACCA qualification.

Mr. Tanti has in these past six (6) years held various accounting positions, primarily in retail and construction sectors locally.  In 2013, Mr.Tanti even ventured to work in the hospitality sector abroad, where he was responsible for operations and  HR management.

Mr. Tanti is committed, task oriented and values the importance of team working.  Mr. Tanti thrives on new challenges, which is essentially the reason why he took the opportunity and ventured into the care sector when joining Golden Care Home’s team . 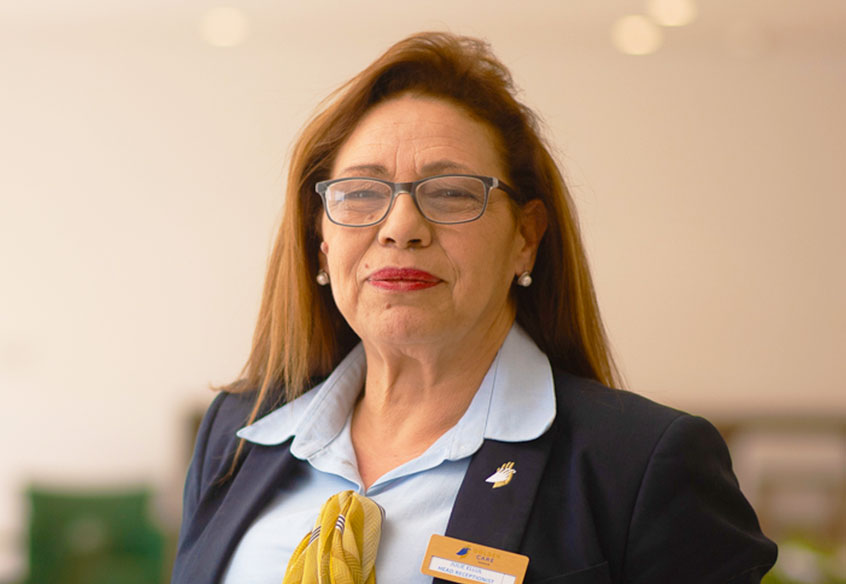 Angela Ellul joined the Golden Care team as Head of Reception with 8 years of experience as a receptionist in elderly care homes, as well as medical and clinical environments prior to joining our team.

Ms Ellul heads a team that supports the facility’s management operation and residents through the provision of various administrative services encapsulating account and accommodation enquiries, billing and bookings, mail and various other general office duties that may arise.

Angela, known as Julie to most, loves animals and is a proud owner of 3 beautiful cats. 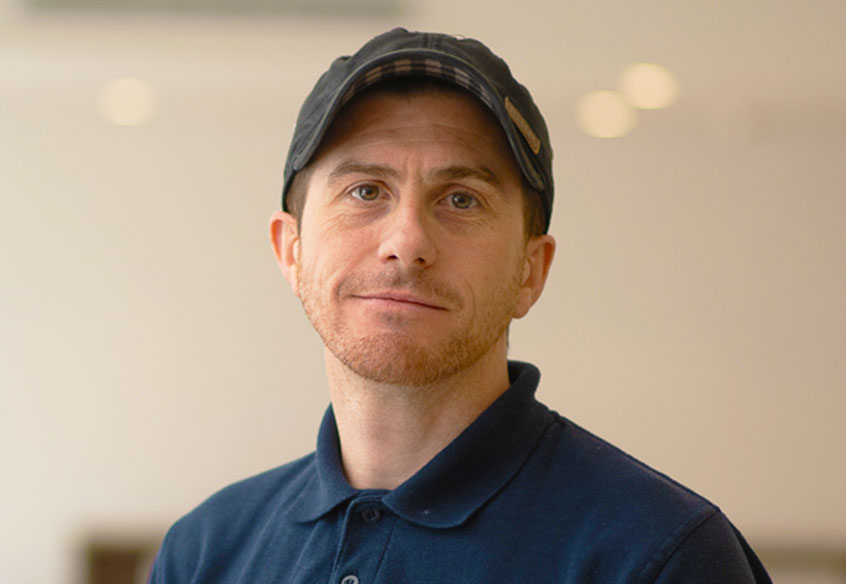 Lee is a qualified welder and fabricator by trade. He has spent his entire working life within the skilled trade industry, learning, perfecting and picking up new skills along the way.

Lee has worked in many different environments with different trades throughout the years broadening his experience and knowledge. He is a strong believer in doing every job properly, to the best of one’s ability and takes pride in what he does.

In his free time, Lee enjoys spending time with family and friends. He loves to paint and paddleboard, and has recently taken up one wheeling as a new hobby.

At Golden Care, Lee is in charge of all maintenance and repairs, ensuring the premises and facilities are always in top-notch working order for our residents to enjoy.

At Golden Care we strive to provide a service that makes a difference to the quality of life for our residents and to ensure our staff are valued for their diverse contributions.

Golden Care Ltd is privately owned two hundred and thirty five (235) bedded care home in Naxxar. Our aim is to lead the way in meeting the changing needs of our elderly clients and their families. The new care home exemplifies all of the values in the delivery of its
C.A.R.E – COMPANY, ASSOCIATES, RESIDENTS AND EXPECTATIONS standards.

The investment is supported by a team of multidisciplinary professionals in the sector, to ensure that the design not only abides by the regulations emanating from the National Minimum Standards, but more importantly, facilitates a patient centred approach which focuses on the residents’ dignity, holistic care, compassion and competence.

Our aim is to lead the way in meeting the changing needs of our elderly clients and their families. These include delivering compassionate, dignified care, designed to enhance the lives of each resident and their loved ones.

unparalleled care for your loved ones

Whether you're after long term care for your loved one or yourself, or just simply need some respite or help after an operative procedure, get in touch with us today to see how we can help.